“Cool, but why are you wearing some crazy gypsy quilt cloak?” I have this idea to do a series of oil portraits featuring the themes of the major arcana of the tarot deck. I’ve read tarot cards for several years now. I’m not about to set up a tent at the Renaissance Faire and hawk fortunes, but it’s fun and I absolutely love my set of Art Nouveau cards. They are gorgeous.

If you aren’t familiar with it, the Tarot deck has lots of cards (seventy something) and the first 22 are called the “major arcana”. They symbolize important events in life. Coincidentally, everyone has a tarot card connected with their birthday as well. (You can look yours up here online)  All the sites I can find, including that one, calculate these with numerology, but I think that’s kind of limiting. So I used this really detailed and interesting book to determine what mine was, which is ‘The World’ (January 21st). The World is the card of fulfillment, completion, and living contentedly with many blessings. In addition to the technical challenge of getting the face to look like my face, I decided to pay homage to the concept of my role as an artist interpreting the world by crafting a kind of shamanic cloak with different paper elements and “fabric” patterns that are relevant to me and my heritage. 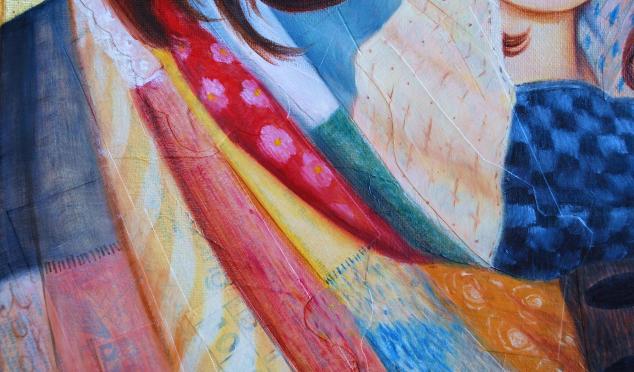 Note to self: Make the rest of your models pose nude. Or in simple fabrics. Just a suggestion.

According to Wikipedia, “Marianne, a national emblem of France, is, by extension, an allegory of Liberty and Reason.” The name “Mary” has long been associated with navy blue. Genetically I have heritage ranging across the globe from the Ukraine to Germany to Mexico. As far as personality traits, I love words and the realm of the handmade. So I laid down a base of paper bits including world maps, a physics page about “terrestrial magnetism”, and several words in French, English and Spanish referencing art and some of my characteristics (like the term full-faced), and I painted patterns mimicking different rustic fabrics like fleur-de-lis, hand-woven wool and floral tapestry. You can still see hints of the paper elements, but they’re mostly a mystery to everyone but me. 😉 I also used gold foil as the background. Historically, gold is associated with richness and joy, but it’s also an art historical nod to Byzantine frescoes and the lot. So now I only have to hunt down 21 other people with birthdays corresponding to the other cards of the major arcana, photograph them, and then painstakingly eke out their personality traits as they relate to the theme of the card through mixed media/oil paint magic. Somehow I get the feeling it’s back to cityscapes for awhile until my sanity returns. 🙂 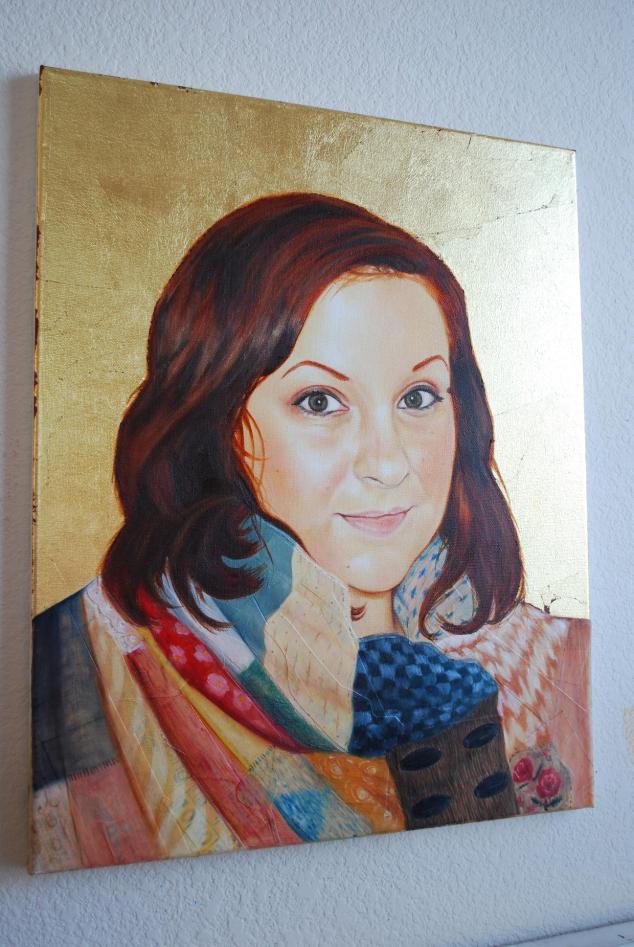