I wanted to start this off with some clever song parody, like “so tonight we’re gonna party like it’s Day 100” or “100 days of art on the wall”, but I realized that all of these really have a ring to them with the number 99. So… clearly that would have been a better idea for yesterday. Anywho, it’s Day 100! YEEHAW.

After 100 straight days of artmaking, I’m struck by how supportive my friends and family (and even strangers!) have been. I’m very grateful to everyone who’s read the blog and made it that much more exciting to be doing this project. I’m starting to sell pieces, which is always exciting, people are telling their friends about the blog, family members are donating art supplies… it’s a beautiful thing.

In particular, I’d like to thank my endlessly supportive husband. Today alone, he ran and got some pictures printed for me, loaded and unloaded the car with all my paintings and display gear, smiled and chatted at my side during the show, loaded the car again, unpacked it all, then stood in my studio and photographed today’s artmaking process painstakingly so that I could use the stills to make a video later on. Through the long hours in the studio and late nights at the computer, he has never complained, even once. Thank you, Rob. 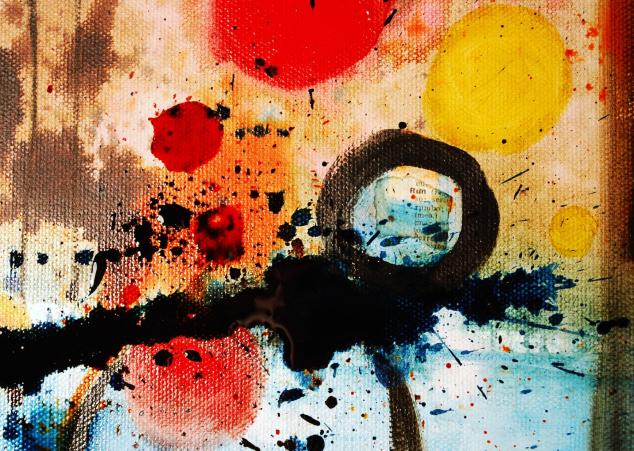 You may or may not know that I’m addicted to Project Runway. The last episode included a trip for the fashion designers to a circus for inspiration. I don’t usually look to the circus for inspiration. Like many, I think clowns are kind of creepy. And I really don’t set out to make creepy artwork. But today, as I experimented with acrylic mediums and watercolors, something jovial and garish and frightening began to evolve on the canvas, and out of nowhere, the title for this 9”x12” painting on canvas popped into my mind. I chuckled and decided to “run” with it. (Found that bit in the dictionary and added it in). Shrug. It’s late. 🙂