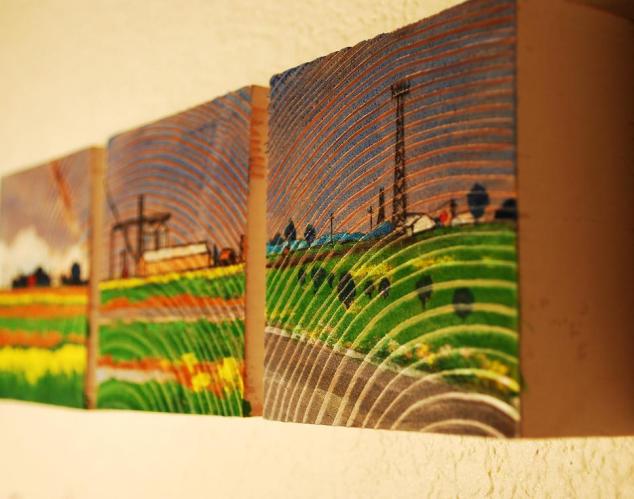 I’m kind of in love with painting on wood right now. I love texture, I love the square format, I love that these were virtually free because I got to use my dad as unpaid labor to cut them for me… they’re just a bucket of awesome. Or rather a box of awesome, sitting in my living room, waiting for their own individual makeovers to occur.

Today, I went with a trio of landscapes from photos I took on the trip to my grandparents’ house the other day. Together like this, I think it gives you the feeling of movement and travel through the charming farmlands of Northern California.

There’s something about the combination of nature and manmade shapes in a composition that’s so intriguing to me. I don’t know what it is, or why it is, but when I do find out, I’ll be sure to let you know. In the meantime, I’m trying to cook ribs for the first time. Wish me luck! 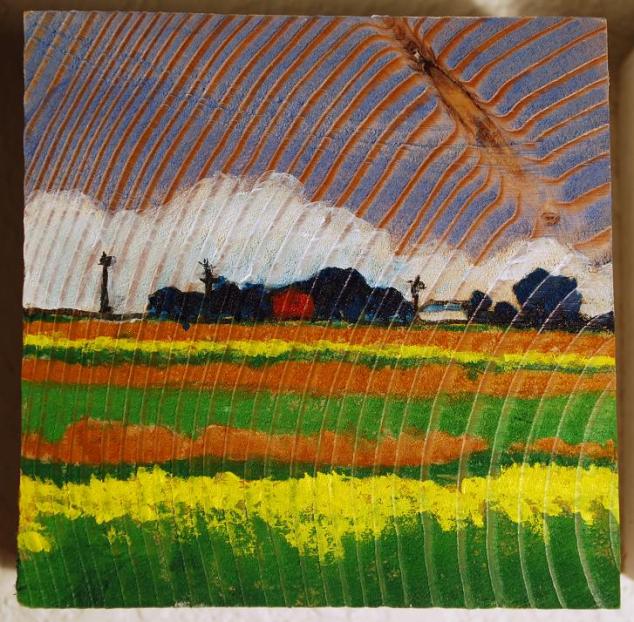 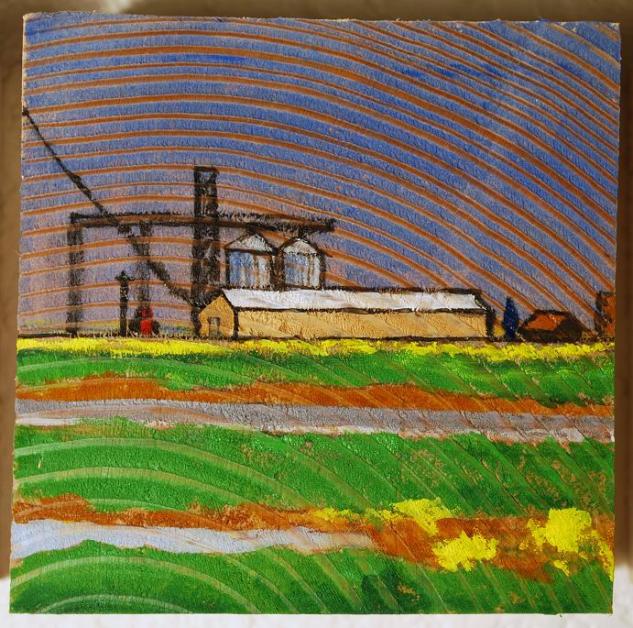 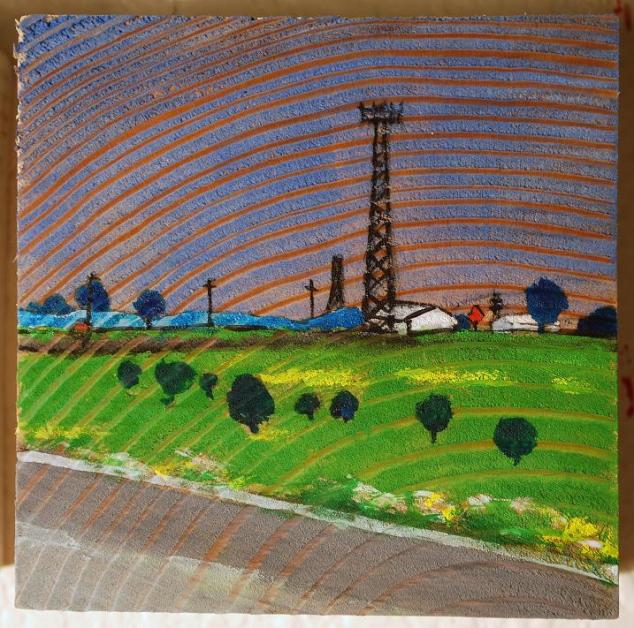 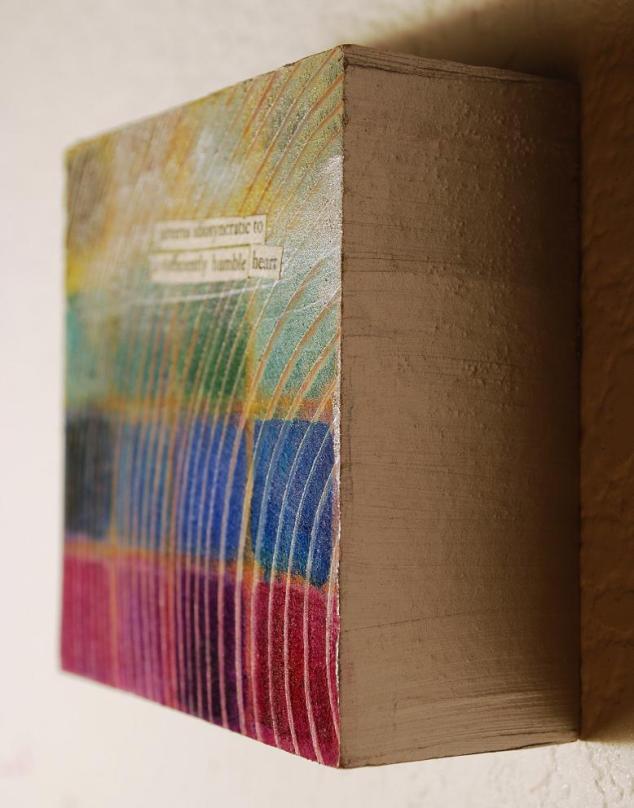 At first I couldn’t paint today because I kept thinking about how somewhere out there is a box of Girl Scout Cookies with my name on them. And I don’t think I’ve even had one for two years. One would think that a powerful brain-altering recipe like that would be examined closely. I think, however, that the people responsible for chemically testing Girl Scout Cookies also love Girl Scout Cookies as much as I do and have no desire to ruin them with some pesky science, so the world will never know. 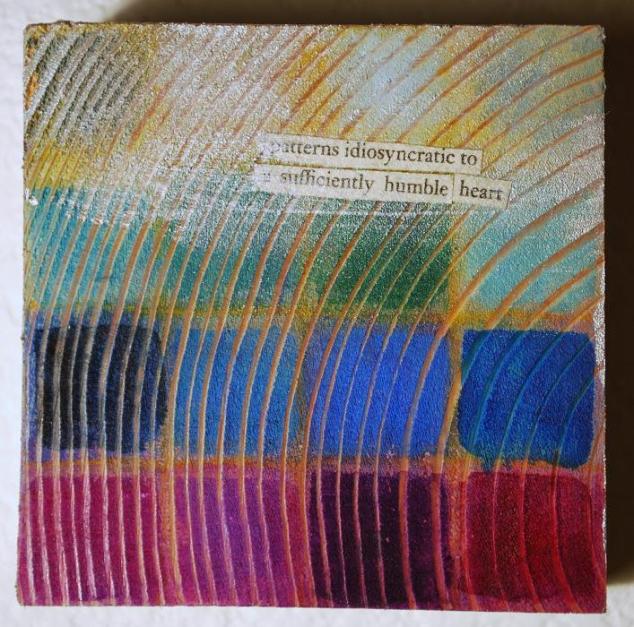 Sometimes one painting I’ve done beckons to its’ soulmate floating as potential inspiration in the ether, and sends it through my paintbrush on to a suitable surface so they can be together again.  Or I’m just kind of OCD and feel like they all need to come in pairs. Either way.

So today I made a match for the red/orange/gold one from the other day with a complimentary color scheme (cool tones and silver sides) and “poem”. Enjoy! 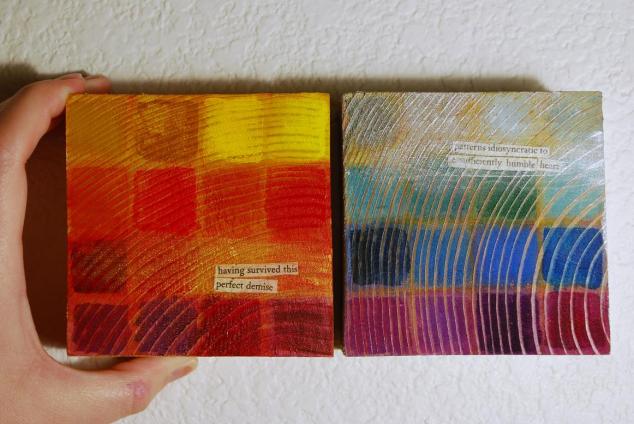 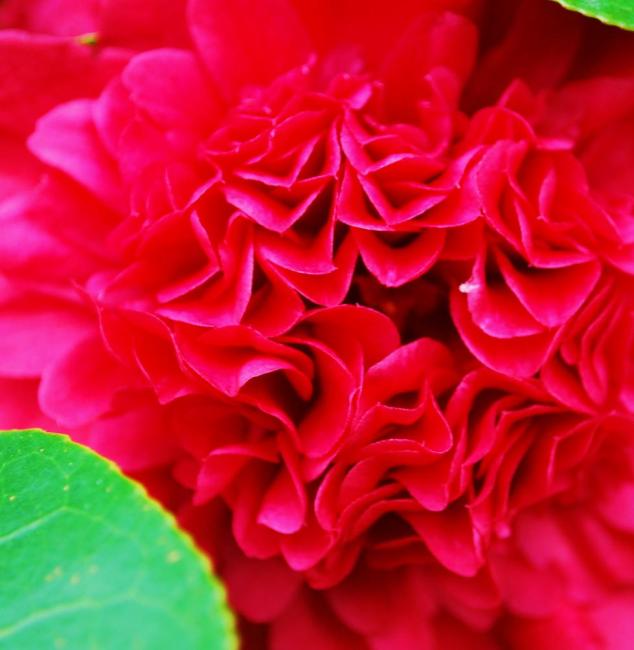 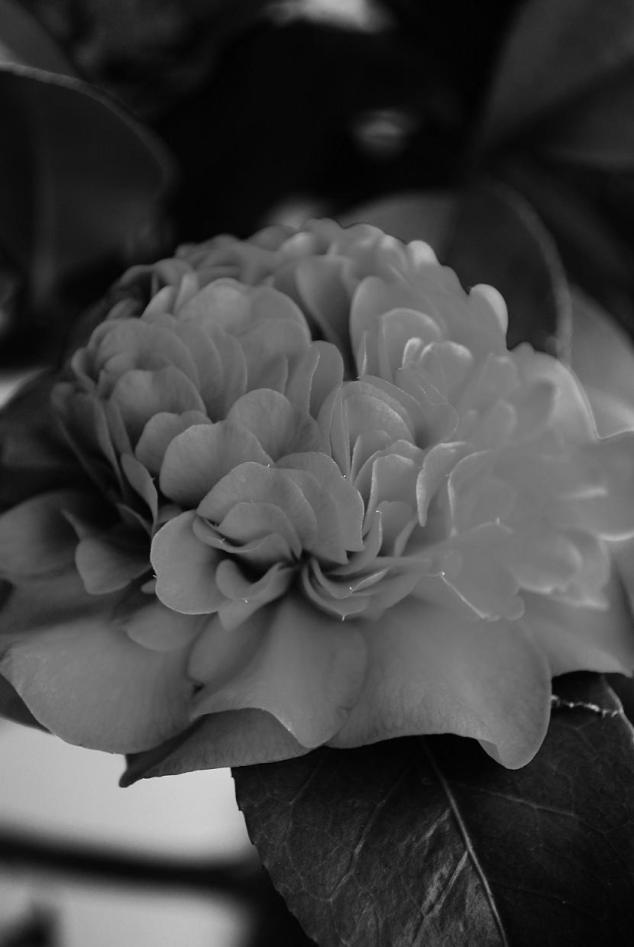 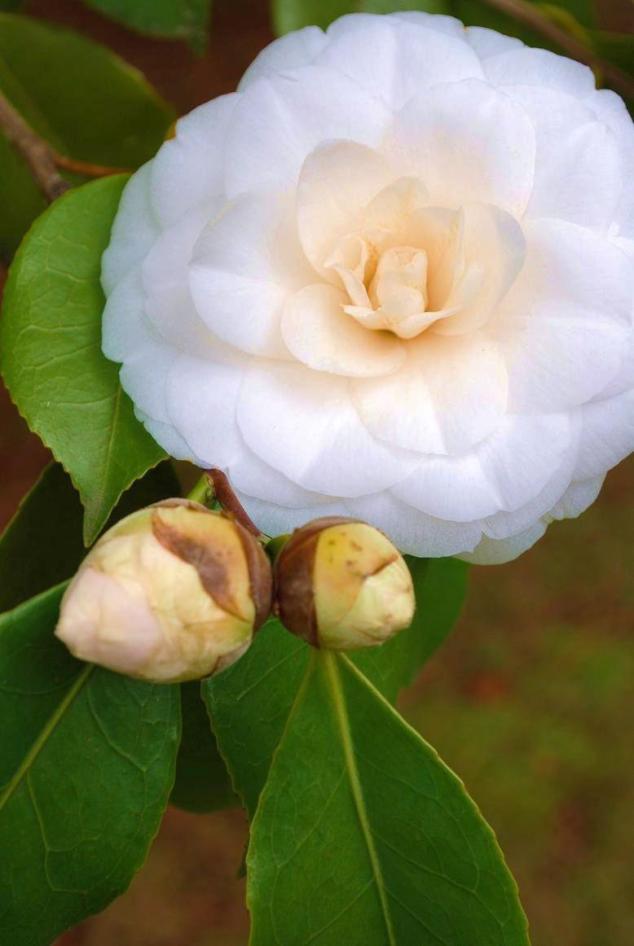 Today is my mother’s birthday! She is visiting my grandparents in Paradise (the city in Northern California, not a figurative wonderland) for a few days, and I drove up there to see her and go out to lunch today. It’s only about an hour and a half from Sacramento, and while some people might find the drive dreary, I enjoy it. I see it as tons of little paintings. I snapped a bunch of photos of the little farmland landscapes that will be appearing shortly on more woodblocks, but having arrived home fairly late in the day and not having tons of time to paint, I decided to go with three lovely flower photos I took today.

These are from Camellia bushes in my Grandma’s garden. She clipped a few and had them floating in bowls of water. It was as if I had just walked into a wedding planning meeting. There’s nothing quite like a gorgeous blossom. When life gets tough, it’s important that we remember to be happy for the little things. And for me, that’s my wonderful, supportive family full of fabulous female role models and other things like fresh flowers. Although I guess an awesome family really isn’t a “little thing”. I love you mom! 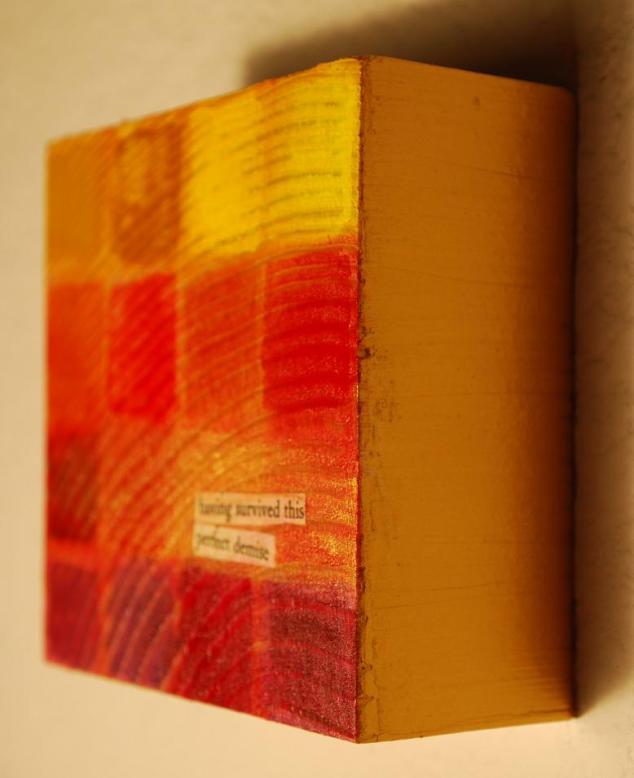 It’s a good thing Rob turned down the neighbor kid selling Girl Scout cookies after this painting was done, or it would have probably been a darker piece. I don’t know what it is about those things, but they’re buy-a-box-and-hide-in-a-parking-lot-devouring-them good. Sigh. I did work out again today, which would only have accounted for, say, ONE Samoa, and I would have wanted to eat four, so I suppose it’s for the best. Sadness.

So here’s where the inspiration came from for today’s piece: I was watching a documentary about the history of Apple today, and one guy being interviewed in some café made some extremely accurate -and hilarious-  observations about engineers & social graces, and I noticed in the background there was this painting that was half figurative, half color-field.

I used to love drawing figures in school (probably because I was good at it), but it’s not easy to do without a nude model and good lighting. Hence, I couldn’t really bust out a figurative piece.

Then I considered writing a poem, but that’s one thing I really can’t force. The good poems seem to come to me of their own volition, and rarely.

So instead, I filled this field with colored squares in warm tones and a makeshift “poem”- bits from the Capote scrap pile- finished it off with a smear of gold and painted the sides the same brilliant color. I rarely use gold, but it felt right today. Et voila! 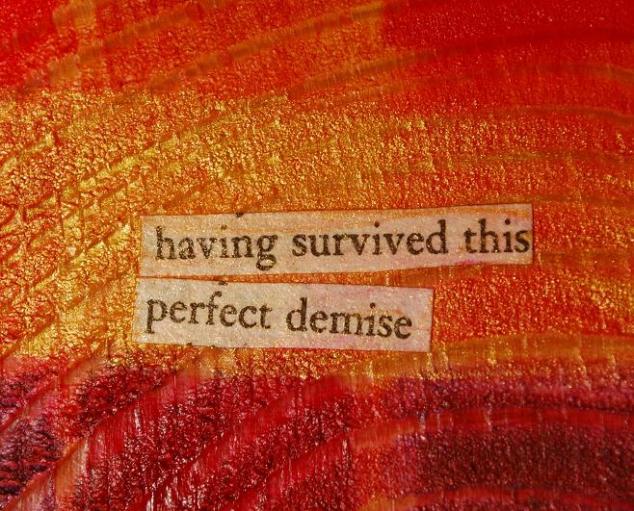 I’m off to attend an art lecture (I know, I am willingly going to a lecture. I must really be an adult now) at the Verge Gallery with my buddy Reina (and I talked someone into going with me! I must really be a con artist too). Here’s hoping it provides some divine inspiration for work to come! 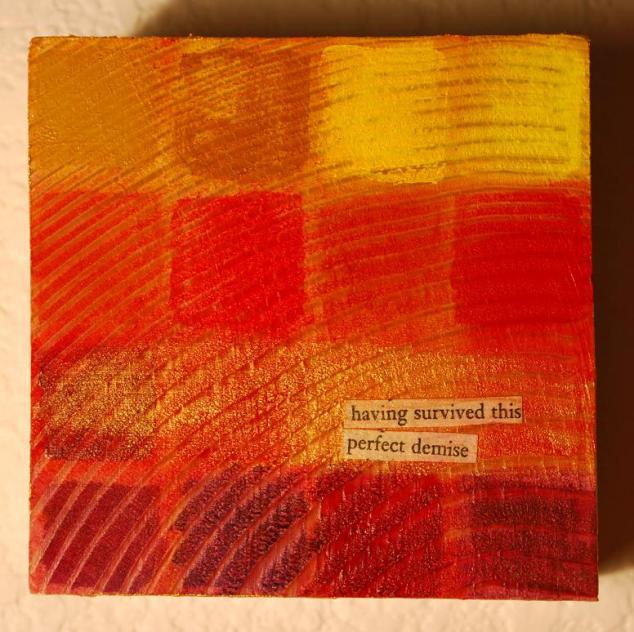 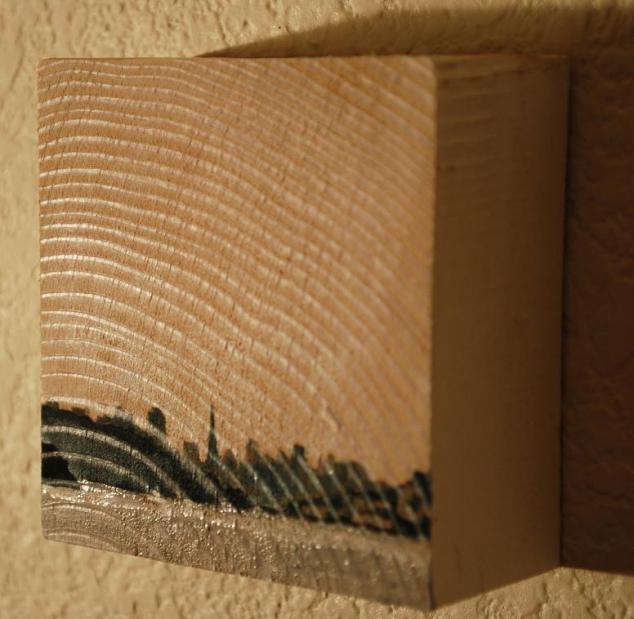 “Leaving San Francisco is like saying goodbye to an old sweetheart. You want to linger as long as possible.” -Walter Cronkite, found here.

I do love the city. I could never live there, because driving in San Francisco is hazardous and terrifying and the parking frustrations alone are enough to incite violence, but I do love to visit. This skyline is from a photo I took while standing across the bay in Berkeley. I was visiting Berkeley for a photo shoot- I used one of those pictures for Day 27’s watercolor- and I couldn’t help snapping a few shots of my old gray friend across the way while I was there. Living in the Bay Area taught me to love all the many variations of gray. I can smell the salty, damp air when I look at this.

Painting on this wood is fun and different. The texture is like velvet. The grain resists the paint, but I don’t mind. And it seems like it would be faster to paint in “miniature”- these blocks are about 4 inches wide and 1.5 inches deep- but it’s such a contrast from what I’m used to. I started out painting murals as a kid, and from there went to pretty large canvases. Only recently (these past few months for the most part) have I done small-scale work on a regular basis. I keep trying to make things bigger than they should be. 🙂

I’m only a month and a half in, but already I’ve learned A LOT about myself as an artist. I sincerely recommend this challenge to other artists. Try making something every day for a month straight. You’ll be surprised and probably amazed with what you end up with. 🙂 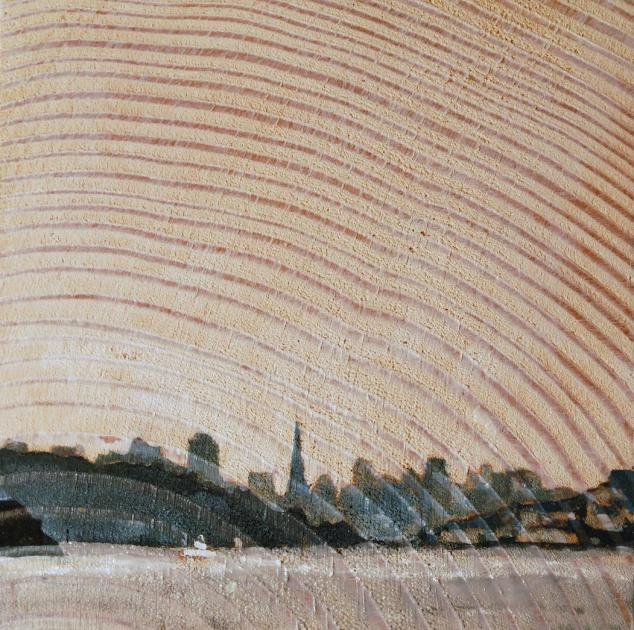 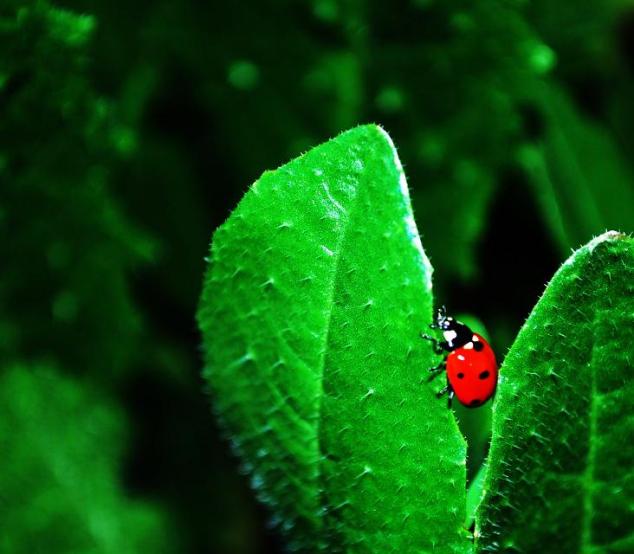 Call National Geographic! I’m officially a wildlife photographer. That is, if you can consider wildlife to be weeds and bugs in untamed suburbia. Despite the ever-present money worries, I’m in a good mood today. Rob & I went on a date into Old Sacramento and had lunch at Jack’s, came home and cleared the house of negative energy with sage, and spent a bit of time in the backyard. Chester romped around in what I fondly refer to as “God’s Gardening” (i.e. we don’t do anything out there), and I grabbed the camera when I noticed that I’m officially the proud parent of a ladybug sanctuary!

I realized there are all kinds of lovely lessons to learn about the positive things in life, and they’re right here in my own backyard! The ladybug in the image above says to persevere even when life hands you prickles. This guy encourages me to “hang in there”, even when everything seems to be turned upside-down.. 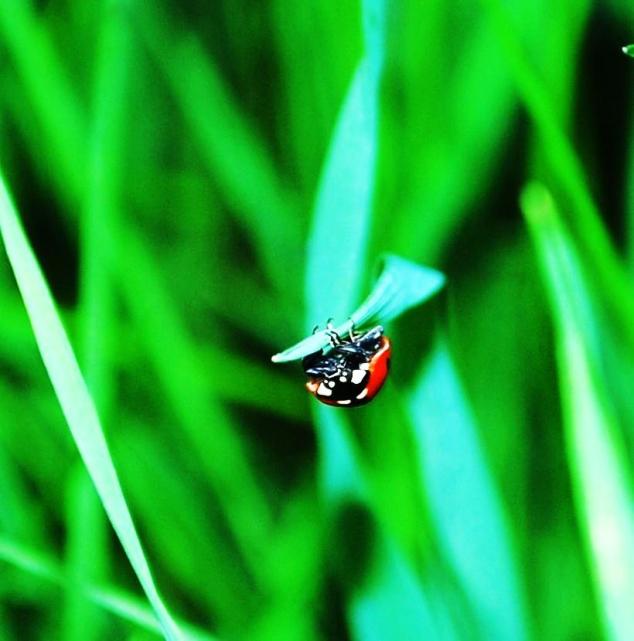 And these ones.. well.. they remind me to spend more time “snuggling” with my man. 😉 I hope these little beauties make you smile. 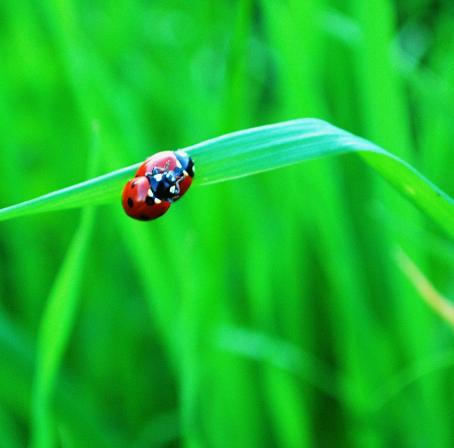 Do you ever start out doing something nice but then it gets ruined in the end? Like holding a door open for someone, but then when they don’t say thank you or nod or acknowledge in any way that you didn’t let the door slam into their bitchy face, you say “YOU’RE WELCOME” really loudly? I know yesterday I was waxing poetic about love and goodwill, but I’ve found those things can’t instantly erase pet peeves.

For example, I wave to say thank you every single time someone lets me merge. I know that in theory, they have to let me merge anyway (or run me off the road, I suppose), but that doesn’t mean it hurts to be friendly about it. In part, this is because of my news-induced fears of road rage, and I’m trying to make sure my bases are covered just in case. But also, I wasn’t raised in a barn, as pictured here in today’s piece with a small grove of Eucalyptus on the horizon at sunset.

I’m starting to think the phrase “raised in a barn” is more equivalent these days to “raised on the internet” because it’s clear that no courtesy is required there. If you are one of these people so very accustomed to roaming around in anonymity without recourse or consequence for your actions (i.e. the hosebeast who didn’t say thank you about the door), do the world a favor and practice having conversations with real people, in person, where you get to use things like tone of voice and facial expressions (vastly more diverse than emoticons, believe it or not). Perhaps if enough people get back into that habit, you’ll never have to hear the headline “local Sacramento woman impales stranger with paintbrush handle over door altercation” in the news. End rant. Thank you. 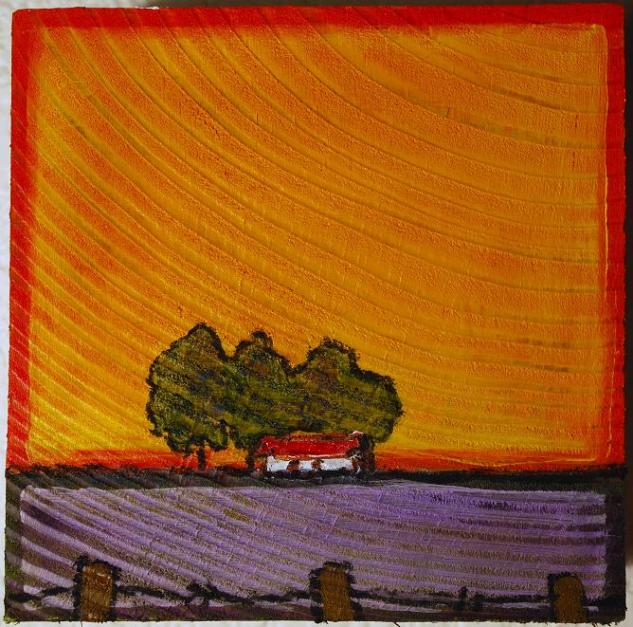